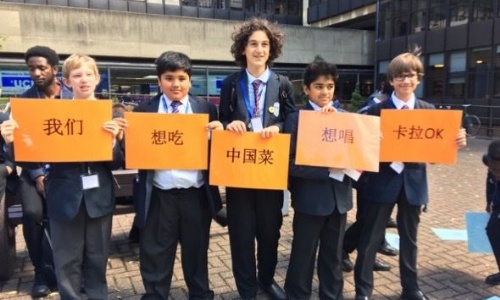 On Wednesday the 12th of July, we (the Year 7 students doing MEP) were fortunate enough to attend UCL (University College London) where we had a fun-filled day filled with remarkable activities.

During the day we took part in:

We started the day with a lesson where we watched some clips from ‘The Voice of China’ (中国好声音), a Chinese reality TV singing competition similar to The Voice of the UK. We learned about a girl called Langgalamu. She is a 16-year-old girl who is from Thailand and has been learning Chinese for only one year and can sing beautifully.

In this lesson, we learned many new words such as:

We then made our own mini talent show which Lucas won with an amazing rap in Chinese. We then had a quick break. Subsequently, we had treasure hunt across the UCL campus which was massive. We went to the Gordon Square, Institute of Education Courtyard, SOAS, The Royal Academy of Dramatic Art, Malet Street and University Walkway. After the vigorous walk around campus, we were able to have mouth-watering lunch.

After lunch, we had a Q&A session with Mary. She represented England in the Han Yu Qiao Competition and came third in her category. Is that not amazing!? To end the day we watched Tai chi, Fan dance, Chinese Classical Dance, Mongolian Dance, Dai Dance and The Sword Dance (which was my favourite). We then had a Sing-off. We had to learn and sing one of the TFBoys’ most popular songs, “Qīngchūn xiūliàn shǒucè.”

It was a great experience and a day I will never forget.

On 12th July 2017, Beths Year 7 MEP went on a school trip to University College London, also known as UCL. We boarded the train at Bexley Station, arrived at Charing Cross, got on the Tube and then arrived at the campus. Our first activity was sort of like a lesson, where we observed the talent show The Voice of China. Next, we went on a tour and a treasure hunt, where we completed a booklet. My favourite part of the Trip was going into the University Museum. The thing that I found quite interesting, yet creepy at the same time, was seeing Jeremy Bentham's body, preserved in a glass container. Next, we ate lunch while a Chinese speaker told us about a competition she went to in Yunnan. After this, we headed downstairs into the hall where a performance took place. The performance included a variety of acts, including Tai Chi, Kung Fu, The Sword Dance and many more. Overall, this day was very enjoyable, one that I would very much like to do again sometime.

On Wednesday 12th July Year 7 students in MEP visited UCL as an interactive opportunity to consolidate our Mandarin skills. We met up outside Reception at 8:50am and travelled by train from Bexley Station to Charing Cross. From there, we took the tube to Goodge Street and walked to the UCL Institute of Education. I was given a Student Booklet and inside it there were lots of activities to complete. After having finished them, we were led outside for a Treasure Hunt Tour following Student Ambassadors, in which we needed to use our Mandarin to solve puzzles by finding clues and engaging with native Mandarin speakers who were positioned around the campus. There was a lunch break and then we entered a large hall to watch some performances. My favourite was 'The Sword Dance', I was amazed at how skilled the dancers were.

I learnt a lot of new vocabulary on our MEP Intensive Learning Day:

Overall, I thought that the trip was a great experience. I expanded my Mandarin vocabulary and had a good time.

I was so excited for the trip, a great way to celebrate our 1st year MEP at UCL (University College of London. We were divided into three groups. Mr Leng, Ms McLeod and Miss Li were our team leaders. We were walking down to the station to take our first train to London Charing Cross. We saw some iconic places like the Shard, London Eye, Big Ben when we were on the train. Then we caught the tube and it wasn't long until we got off. We had a 15 minute walk to UCL and we were warmly welcomed by the people who worked there.

We had a first activity with a teacher. We were talking about the Voice of China which is called 中国 好声音 (Zhōngguó hǎo shēngyīn) and we watched a performer from Thailand (泰国Tàiguó) who is called Lang Ga La Mu. Then we had a great talent show where we competed including myself. We were singing and it was really funny to hear others’ songs. We had a short break then set of for a treasure hunt.

We were accompanied by a student ambassador from UCL and she guided us on our hunt/tour round UCL. We had to use our Mandarin skills to solve the questions in our booklets. We went to RADA (The Royal Academy of Dramatic Art) and we wrote down our favorite actor and why we liked him or her. We went inside the building and we saw the remains of Jeremy Bentham, a philosopher. It was his skeleton covered in his clothes and had a wax head - the real head is stored in a freezer. We found out facts about him and also asked some Chinese speakers there as well. I liked the Octagon because of the vibrant colours and the things on the exhibition - again there were questions about the objects and we had to guess them in Mandarin. We went to a cafe and we were asking a Chinese speaker about the price in Chinese. We came back to the start and we did a challenge with cards with Chinese characters and we had to make a sentence with the cards.

During our lunch break a student from Oxford came in. We were questioning her about her studies in Mandarin and her visit to China. We were listening to her talking about Han Yu Qiao competition in Yunnan Province of China.

We went down to the hall to watch a variety of dance, including the fan dance: The Butterfly Lovers is a tragic love story, which in China is equivalent to Romeo and Juliet. This dance expresses the extent to which the heroine misses the hero after they have been separated for an eternity. Next was Tai Chi. It is a style of Martial Arts which combines deep breathing and relaxation with slow and gentle movements. It requires deep moves, other parts move, too. It’s great for coordination. My favorite part was the sword fight where was the Sword Dance, Chinese classical dance with sword techniques of Chinese. This piece combines martial arts. We then had a big sing-off with the other schools altogether there were 300 children from all schools. We were singing from the song by the TFboys called The Album of Youth. We got split into two groups from around 400 students.

Then it was time up for our day out at UCL. Everyone was really sad that it ended but we had to leave. We walked back to the underground and took the tube back, it was not busy like the morning. We won sweets by answering questions from our teachers when we waited at the train station. It was a great trip, I enjoyed it and learned a lot.