On Monday 11th July, Mrs M Johnstone, Mrs Cato-Sargeant and Mrs James along with the Year 10 students who are taking Spanish as their GCSE had the great opportunity to attend to our MFL Cultural after-school activity and trip: “Film & Spanish Restaurant Day”. They watched “Pans’ Labyrinth”, learnt valuable information about the Spanish culture during Franco’s era and put their Spanish knowledge into practice while watching the film.

After this, they went to the Spanish restaurant called “Chupitos” in Welling where they tried a variety of Spanish tapas accompanied with a delicious Paella, and finished with some spectacular “Churros” with chocolate and Ice cream and some “Dulce de Leche” dessert with ice cream.

To order all this delicious food, YR 10 had the great experience of practicing their speaking skills while ordering and discussing with their friends and members of staff about the food.

We can only say that at Chupitos there were options for everyone’s preferences which show the delicious, rich and colourful menu, from the starters to the dessert. Every dish fulfilled everyone’s expectations.

Here we have some of the reviews from some of our students:

Everybody! Our YR 10 trip to a Spanish Restaurant was something not to be missed. Although we could not go to Spain in real life, without any doubt we could taste its delicious food!

Our trip started with the film “Pan’s Labyrinth” which we watched at school and lasted approximately for 2 hours. It definitely was a great experience as is follows fantasy, good and bad and life and death. I won’t say much as I don’t want to spoil it but it was a very good film to watch, especially because you will study it for your Spanish - A levels if you choose to study Spanish.

Then, we went to a restaurant called “Chupitos”, in Welling, where we finally ate! To be honest, it was the best part due to the fact that I love eating! Ha,ha,ha.

To start we had bread and olives, then we ate our “Tapas” which each one of us chose. That was when I tried Calamari for the first time. I won’t lie that I was hesitant to start with; but they were very good. After the moment of the “Paella” arrived, (which is a famous Traditional Spanish food, very popular in Spain), it was at that moment that I tried the Spanish Culture. – It was delicious, I loved how tasty it was!

And we finish with the sweet delicious taste of “Churros” with Chocolate sauce. A very refreshing way to finish our day.

In general, this trip was a great experience and I am very grateful with my teachers for allowing us to have this opportunity.

On Monday, the 11th of July, many students             studying Spanish attended a special after-school activity.

During this, we first watched a Spanish film called "El Laberinto de Fauno" or "Pan's Labyrinth", where we followed the perspective of someone in Spain in 1944, 5 years after the Spanish Civil War. Through this, we were able to explore more about Spanish history and how it has formed its culture today.

After watching the film, we travelled to "Chupitos" Restaurant in Welling via bus, where we enjoyed a variety of delicious Spanish dishes and "tapas". For example, I really liked eating the "Paella", which is a traditional rice dish eaten in Spain, and "Churros", an arrange of sweet fried sticks.

Overall, through this trip, we were given the opportunity to learn more about the Spanish culture and practice speaking Spanish in the real world. It was a great success! 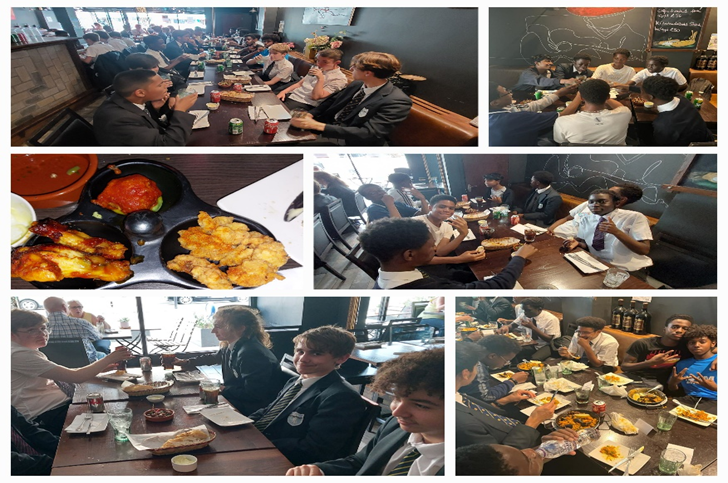