Trip to the English Speaking Union 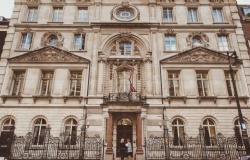 On Sunday 27th February, the school public speaking team went on a trip to Dartmouth House in West London, the official headquarters of the English-Speaking Union.

We were kindly invited to watch a debate entitled:

It was the first debate we had seen and not knowing what to expect, we were incredibly surprised by how interesting it was. Arriving at the grand building, we took pictures and met the chairman for the debate, who told us how he got involved with the English Speaking Union, when he was 14 and has never left since!

The structure for the debate was:

2). development speeches for both speeches

3). then the two final speeches.

Before the final speeches, the chairman opened up the discussion for a floor debate, where the audience got to ask questions to the debaters, for them to address in their final speech. Some raised how the government has an obligation to protect public health care, whilst others questioned how far security must be prioritised over individual liberty and whether this must always be the case. I argued that democratic nations, like the UK could not maintain a proper democracy, without respectfully considering the opinions of all their people.

The final speeches were given by the two younger speakers and they were both absolutely incredible. One of the most poignant points gathered by the proposition was that though most people can survive lockdowns with ease, vulnerable people are negatively impacted the most. Those who live in dangerous homes, those who depend on in-person jobs and cannot sustain their families with furloughs, those who struggle with their mental health.

The opposition was able to address most points, in closing. They argued the government has a social responsibility and that during the start of Covid-19, the UK was given no other option but to lockdown the nation. They argued that preventing death is the most important thing and “desperate times call for desperate measures”.

The most interesting thing was the way all the speakers spoke. They spoke fast at points, raised their voices at points, then talked quite quietly or paused to get a reaction from the audience. The way they presented their arguments with such passion was really cool to watch and it made everyone in the audience drawn to their points, even if they didn’t necessarily agree with them.

Incredible points were raised on both sides but the proposition won 39:31. If you wish to learn more about the English-Speaking Union, follow this link: