The Curious Incident of the Dog in the Nigh-time 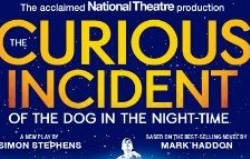 On Tuesday 15 January, Year 10 Drama students were able to go to London to see the amazing play, ‘The Curious Incident of the Dog in the Night-Time’.

On Tuesday, Year 12 and Year 10 students taking A Level and GCSE Drama took a trip to see The Curious Incident of the Dog in the Night Time at the Piccadilly Theatre in London. The students had fantastic seats sitting in the stalls with clear views of the dynamic staging. By the interval the students were talking about everything they had seen in the first half with real excitement and enjoyment. At the end of the play the students gave the actors a standing ovation and listened with admiration as Christopher Boone solved his Maths question to finish off the whole performance. The students have come away from the theatre full of new ideas to inspire their performance work.  Ms Grady

We were taken on a trip to see The Curious Incident of the Dog in the Night Time on Tuesday evening. It was very fun to watch and I’m glad Ms Grady took us to watch the play. There were various scenes in the performance that I personally enjoyed. For example, I loved the big lifts and the wall running as well as the use of the lighting to make the scene transitions more slick. It has a really intriguing effect on me and throughout the play I was interested to see what happened next. It is one of my favourite plays and I hope to see it again in the future. B Richards 10W

The Curious trip was really good as it was the first play I have ever seen at the theatre. I found it enjoyable because I was able to understand the story clearly due to the actors creating engaging characters and the dynamic use of lifts and movement has inspired me with my Drama GCSE. It was also fun to recognise some of the movement and lifts we had done in lesson too. L Leech 10E