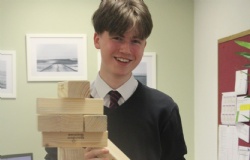 We were delighted to welcome Ahmad Nawaz to Beths Grammar last Friday.  Ahmad survived a terrorist attack which took place at his school when he was 14 years old.

But now the brave teenager has turned the atrocity into something positive by travelling around the country giving anti-radicalisation talks to other students.

During the talks he tells his story and then urges the youngsters not to allow themselves to be drawn into the extremist world.  He tells them how he was just 14 when members of the Taliban stormed his school in Peshawar in December 2014 and carried out a brutal massacre of everyone in the building.

“My brother was killed, 150 of my friends were killed and I watched my teachers being burned alive in front of my eyes,” he said.

“It was the most horrible experience of my life because school is a place where you expect to be safe - I never thought I would be attacked there.”

Ahmad was badly injured during the attack and spent two months in hospital in Pakistan before being flown to the Queen Elizabeth Hospital  in Birmingham.

“They thought my arm would have to be amputated and it took 11 operations and two years in the QE but they managed to save my arm,” he said.